Unless it escaped your notice or perhaps you have not grasped just how batshit crazy Mr Ashton went this weekend, these blogs (Dick, Jo, Random Vaper and VapeMeStoopid) have the screenshots you need to see. This behaviour was NOT based on our beloved Fergus (or anyone) exercising his expansive knowledge of colourful & creative insults (which he didn't!) or anyone being abusive. This snowballed after a few of us asked reasonable and polite questions. Actually, one question got me blocked. Others didn't even have the luxury of ONE question. Thinking about it, I have no idea if I was blocked BEFORE all of this, none of us do!

Anyhow, hopefully you have seen the pics of the tweets and understand the true absurdity of the situation. I know others have done this too, but here is my personal letter of complaint to the Faculty of Public Health.

This is not a letter I take any pleasure in writing but I feel that, in the circumstances, there is no other option. Please accept the following as a formal complaint against the President of The Faculty of Public Health, Professor John Ashton, under section 4 of your complaints procedure, as a result of inappropriate behaviour on social media. As such I would like confirmation of receipt of this complaint and confirmation that it has been forwarded to the registrar.

I am a Vaper, e-cigarette user if you will, of almost two years. I and many others have made sure that we have kept abreast of all developments in this area in that time period. I am a genuine person who is not in the pay of industry of any description.  I would call myself an advocate, but be clear that I am an unpaid one. In the course of trying to get the voice of the vaper heard and considered by those in public health, tobacco control, the media and those in politics, I (and many others) have been subjected to many accusations and insults. We have been shut out and discounted for many reasons. We have observed and listened to many experts in the field of Public Health talk in the media about things that we know not to be true and yet we have not be able to redress the balance with what we see as the truth and what the data refutes.

This was never more apparent than Professor John Ashton’s behaviour  this week, having appeared three times in the media with unsupported claims and misrepresentations of data.

As members of the public, we do not have the ability to comment on these assertions. We are not able to talk with Mr Ashton via anything other than social media.

However, when approached on Twitter (initially reasonably) myself and others found ourselves blocked with no answers given to our questions.  A brick wall was very quickly built and from behind it, with no way of us being able to respond or defend ourselves, Mr Ashton began to hurl abuse.  Vapers who had not been involved in trying to communicate with him whatsoever, found themselves being told they were addicts and slaves to this addiction. From their perspective, this came entirely out of the blue as it appears Mr Ashton had trawled through their timelines in order to find a tweet he could then insult them from.  This one I find to be most disturbing, please note that the tweet he attacked is dated 20/08/2014. 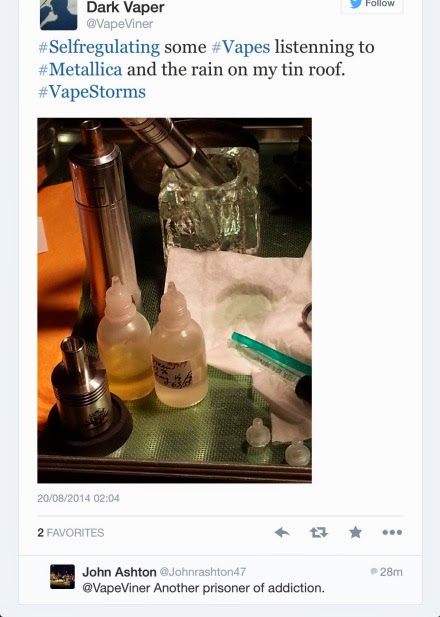 For a man in a position of authority and power to deem it appropriate to seek out and attack a member of the public for doing something a) completely legal and b) is reducing their harm in place of smoked tobacco, beggars belief. It is unfathomable to imagine that Mr Ashton is able to view harm reduction for smokers with anything even approaching objectivity. To this end, it is entirely inappropriate for him to be in a position of authority that will have lasting effects on the future of e-cigarette usage in the UK. It is bad enough that, as advocates, we have been shut out and ignored but to then be called cunts, onanists, ‘lads behind the bikesheds’, addicts, tobacco industry shills (Indeed shills for ANY industry) is beyond the pale.

If these are the thoughts that sit behind decision making and position taking on e-cigarettes then it is clear that Professor John Ashton and the Faculty of Public Health are not fit to be involved in the discussion.  As such these personal attacks have to be apologised for and Mr Ashton must have no further part in the wider discussion on the place of harm reduction for smokers in society. This is a volatile situation and involves the lives of many millions of people. To allow yourselves to be a part of the movement that seeks to restrict access to what may be life saving technology, based on the personal ideologies, prejudices and ill informed opinions of one man calls into question the role of Public Health in its entirety.

I look forward to your response,

I removed this paragraph being as it is best we don't get drawn into the details of misrepresentation of data, it avoids them using it to distract from the situation. I am putting in here cos I need to get it off my chest.

"This was never more apparent than Professor John Ashton’s behaviour  this week, having appeared three times in the media with unsupported claims and misrepresentations of data. No example is clearer than his willingness to espouse the validity of the most recent data on E-cig use in US youth, from the CDC.  One would hope that Mr Ashton had done more than read the conclusion/press release and seen that the data within the study does not support the resulting media frenzy. It is of great concern that a man in Mr Ashton’s position would not read a study before taking to the airwaves in order strike fear into the hearts of every parent in the UK. This alone is questionable behaviour. Further to this, to willingly overlook and underplay statistics from both ASH and Professor Robert Wests ‘smoking toolkit’ in order to push, what can only be called an agenda,  the ‘Gateway to tobacco’ theory and that ‘self respecting’ adults would not use sweet flavours."

I find this entire situation both hilarious and terrifying. Whether or not the man was drunk when he embarked upon this bonkers and vicious campaign, is irrelevant. Alcohol does not create, it amplifies. The mask slipped and my god it was covering something breathtakingly ugly. This HAS to be addressed as people like John Ashton have NO right to be involved in this when he holds the people affected in such absolute contempt.

It really is never ending, isn't it.