Public Health and The Tractor

Yes it has been ages since I last wrote anything and yes I know that blogging requires more work than I have been putting in and YES I am sorry!

Anyway, what particular thing is it that has made me log in and start typing? Well, it is kinda mundane actually and starts with a thought I had whilst driving...what better premise for a blog?

As some of you may know, I live in Cornwall. Deepest...darkest...North Cornwall. Sparsely populated and riddled with a myriad of tiny, narrow and unfriendly roads without white lines and with a good many completely blind corners that appear quite without warning. This is also holiday-maker heaven; every school break the population of North Cornwall explodes with terrified drivers whose cars swell to at least twice the size on the journey down here which means none of them fit on our roads. Or so they think. The result  of this is many 20 mile an hour journeys stuck behind some poor soul who thinks every tractor coming towards him is going to drive straight over his 4x4 which has never seen a muddy puddle, let alone left the tarmac. It also provokes a special kind of rage in locals who are forced to drive behind someone who positions themselves in the middle of the road, or worse, find themselves half way round one of our many blind corners facing some idiot who is driving in the middle of the lane with those 'this is the middle of the road' white lines under the very centre of his car!

I digress (that felt good though). One of the major problems we have down here on the roads are people who blindly follow their sat navs places that simply are not suitable for those who are incapable of putting their car into reverse and driving backwards a little bit. Not just  holiday makers either, a quick Google search will bring up stories of lorry drivers wedging themselves between buildings in a tiny village they have tried to squeeze their massive bulk through. I once watched a coach beach itself on a hairpin bend as it had followed the sat nav down a road that it could not possibly make to the end. How we laughed as it sat there, its wheels spinning futilely in the air and its belly resting on the road, rocking slightly as all the fuming passengers disembarked.  There was even a case of one lorry driver who, thanks to his unwavering faith in his digital direction dictator, found himself driving directly onto a beach!

So, I was stuck behind a hapless fellow on the road to Bude (which is a 60mph road) who was pootling along at 40 mph whilst mesmerised by the little screen attached to his dashboard, and it struck me! Sat-navs! Actually that is not fair, it is not the sat-nav's fault - it is the drivers fault, they are entirely reliant on their sat-navs. SO reliant that they miss all the obvious signs around them that give them actual clues as to what is really going on. So distracted that they don't notice cyclists or bikers, where they are on the road, what the car in front is doing or even the fact that that sign says NO CARAVANS DOWN THIS ROAD!

What struck me is this; I was stuck behind Public Health!

Public Health and Tobacco Control are so completely and totally ignorant to what is going on around them because they cannot raise their eyes and just look! They are exactly like every single driver I have sat behind who is gripping the wheel, white knuckled, glancing nervously at the sat-nav whilst the beautiful Cornish countryside sweeps past unnoticed. They bicker with the person in the passenger seat who points out 'Uh...I think we just drove past the turning....oh, sorry, yes darling I know....we must have lost the GPS signal for a minute...' as somehow it is their fault for looking out of the window and seeing with their own eyes what is going on. They doubted the Sat-nav! How dare they!

Every single I time I see the same tired and boring arguments about nicotine being as 'addictive as heroin', that nicotine use is going to create cocaine addled monsters out of our children, that this is all 'straight out of the tobacco playbook', oh and 'flavours are only there to ensnare The Children' I am seeing people who cannot think for themselves. Indoctrinated and utterly lacking in the ability to function without someone else telling them what to think.

I do not have any sympathy for the drivers on these roads that make me late, double my journey times, cause tirades of expletives that make my children say 'Mum! You shouldn't swear' and worst of all, cause accidents every single year without fail. Blind people causing harm cos they are not looking where they are going!

That is every single Dr, Researcher, Scientist, Sociologist, whatever, who point blank refuses to see that the real world, real living people around them are doing something that their studies are not and cannot and will not show. In ignoring us, You Are Causing Harm.

And much like our white knuckled drivers, at some point that tractor IS going to drive right over your car...and we vapers will wave back at the crumpled remains of everything you thought you knew as we carry on our merry way. You know what else? There will be some of yours on board with us! 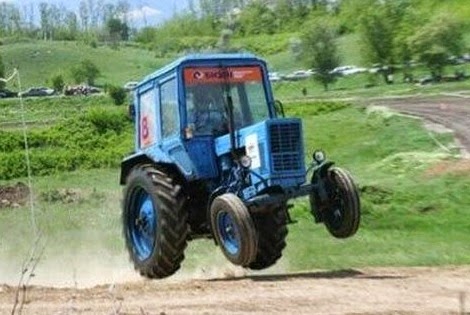